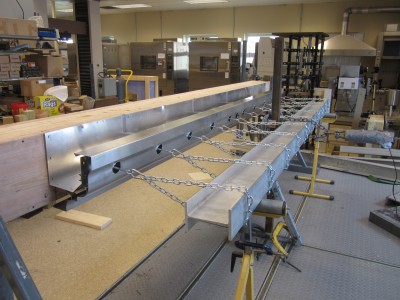 “Having our Industrial Gutter System tested to the GD-1 standard confirmed expectations,” according to SAF Perimeter Systems Product Manager, Corey Faciane. “But, we were especially pleased to learn our concealed two piece Designer Series Gutter System tested beyond industry standards in all three test categories.”

Since the introduction of the company’s innovative Designer Series line of gutter systems nation-wide in 1990 there have been no reported failures.

Both Gutter Series are available in 56 standard colors and a variety of aluminum thicknesses. Custom colors are available and accommodated in the SAF Paint & Coating facility.

The Vertical Radius Arch Cornice joins the company’s Designer Series Aluminum Cornice system which also includes a Horizontal Radius Arch and is used in commercial and residential buildings throughout the US. Architects and design/build contractors can now complete virtually any cornice condition with interchangeable moldings that easily combine to provide the crisp detail and longevity of extruded aluminum.

“Our design team has responded to requests for an aluminum cornice product to complement their arched roof designs and we are pleased to announce availability Designer Cornice Series Vertical Radius Arch,”according to Corey Faciane, Perimeter Systems Product Manager.

Long time Perimeter Systems manager Frank Mills is retiring after 22 years with SAF. Mr. Mills served the Roofing and Construction Industry for the last 40 years and has held the General Manager’s position since 1990. He pioneered the development of commercial grade Aluminum Gutter and Cornice components. In his retirement Mills plans to sail the second half of the Great Circle and to travel Europe.

SAF promoted Corey Faciane, 32, to Product Manager of Perimeter Systems. Faciane started his duties on February 4th, and brings with him more than ten years of experience in construction and project management. As a carpenter’s son Faciane grew up in the construction industry, and looks forward to working with architects, owners, and contractors.

Faciane commented, “I look forward to working closely with our fabrication team and customers to produce quality products for our customers.”

All written communication and invoices should be directed to the new address. Our billing address, telephone number, fax number and email addresses will remain the same.

Perimeter Systems has moved! Note our new address below. Our phone, email and website information have not changed.

New for 2012, Perimeter Systems continues its reputation for unique, innovative products. Architects and design professionals have asked and Perimeter Systems once again rises to meet the demands of the industry. Stretched Formed Radius Extruded Cornice Mouldings are now available to be customized to fit any building’s interior or exterior circumference.

As with all our Designer Series Extruded Cornices, installation is a snap. These stretched formed radius mouldings may be installed on typical building sub framing or on our specially designed mounting gussets eliminating expensive framing.

Since the introduction of the Designer Series Extruded Cornice Mouldings in 2010, Perimeter Systems has continued to develop new and exciting fabrications from these extruded mouldings to meet the escalating demand for innovative aluminum cornice products.

In 2011, our Research and Development team established new miter fabrication techniques to maintain the sharp crisp edges throughout the welded seam. These new techniques have been widely accepted throughout the Architectural community due to its refined and elegant appearance.